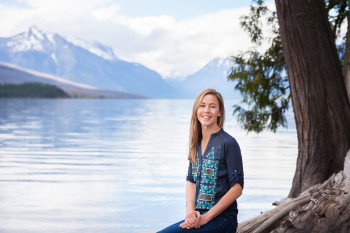 Christine grew up in Gainesville, Florida – the same town her main character in The Wild Inside grows up in – then moved to Kalispell, Montana when she was twelve. At first, she hated leaving her friends and the beaches of Florida, but after a few months of living in the Flathead Valley, which is surrounded by beautiful lakes, mountains, wildlife and a ski resort, she quickly came to love the area. After high school, she attended college at Pacific Lutheran University (PLU) in Tacoma, Washington. While there, she became interested in studying abroad and went to Norway, and when she returned – having been raised in a family with several aviation buffs – she got a private pilot’s license and decided to go to Embry Riddle Aeronautical University in Prescott, Arizona. While she was there, she realized she was more interested in the literature and humanities classes she was taking, so she decided to major in Communication Arts and finish her undergraduate degree where she started, at PLU.

After graduating, Christine worked in Seattle, but knew she wanted to travel. She also wanted to save money for graduate school, so when she heard that Delta Airlines was hiring, she became a flight attendant for a little over a year to achieve both. Shortly after, she returned to school to the University of Montana in Missoula and received a Masters in English/Linguistics. After, she began teaching English courses at Flathead Valley Community College in her hometown of Kalispell.

Remembering her earlier years spent with family in Glacier and living close to the park again, she fell back in love with it and spent most of her free time exploring there. Along with getting married and starting a family, she also began writing creatively and wrote two non-genre novels and by the time she was ready to do something with them, she went through a divorce and became a single mom and put them away. Teaching as an adjunct at the community college was not enough income for a single mom, so she began to supplement it by doing technical writing part-time and eventually, full time, which left little time to write creatively. She put novel writing aside for the better part of a decade. When she wasn’t working on technical documents, she was raising her son and for the benefit of her physical well-being, she became involved in Pilates. Ultimately, breaking away from technical writing and opening her own Pilates studio afforded her the flexibility to write creatively again. She remarried, continued running her studio and finally, pursued her passion to write.

The endeavor of writing has been an amazing journey for Christine, filled with all the necessary binary operations in life: self-doubt and self-belief, pain and joy, frustration and contentment, sadness and happiness, defeat and hope… the list goes on. Throughout this process, Christine has come to realize that writing is even more fulfilling when she stays involved with other writers. She is a member of Sisters in Crime, Mystery Writers of America, Authors of the Flathead, Pacific Northwest Writers Association, International Thriller Writers, Outdoor Writers Association of America and Montana Women Writers.

More importantly, she is aware of the investment of time and money when readers take a chance on a new author and a book in general. For this, she is eternally grateful for the support!

Christine is a recipient of the Womens’ National Book Association Pinckley Prize, the Silver Falchion Award and the High Plains Book Award. Currently, she and her family live in Whitefish, MT. When Christine’s not teaching Pilates or writing suspense, she’s enjoying all that living in Northwest Montana has to offer.